During the most recent digital acquisition work done at the National Gallery of Ancient Art (Gallerie Nazionali di Arte Antica) in Rome, the masterworks of Caravaggio recently published in the digital gallery of Haltadefinizione are not the only works that were captured. The portrait of Beatrice Cenci attributed to Guido Reni was also scanned. The young woman in the painting is traditionally identified as Beatrice Cenci, a noble Roman woman who was accused of parricide, put on trial and beheaded in Rome on September 11, 1599. The story is told that Guido Reni painted the portrait in prison a short time before her execution, a tragic event that due to the fame of the Cenci family, attracted a great deal of public interest.

The attribution of the work to Guido Reni has been subject to debate and some diagnostic research that preceded restoration work done on the painting in 1999, revealed some new information that could confirm it. Two artist’s corrections were detected under the surface of the painting, in the area of the turban she is wearing and around the face. Chemical dating places the painting in the early 1600s. Together with a careful stylistic analysis, these discoveries tend to confirm the attribution to Reni, a skilled artist with very refined technique, except that he was supposedly in Bologna at the time. More recently, it has been suggested that Ginevra Cantofoli, a little-known Bolognese painter of the early seventeenth century, could have painted the work.

In these cases, ultra-high definition Gigapixel digital imaging can be a useful tool for analysis of the canvas, by allowing close study of the brush strokes and for understanding other aspects useful to reasearchers. Ultra-high definition digital reproduction and the multi-media online viewer can give any observer the ability to delve into every detail of the painting and to study its surface in a completely new way.

The story of Beatrice Cenci

The portrait is one of the most famous and fascinating ones in the Palazzo Barberini. The young Beatrice was the victim of repeated abuse from her father, until finally, together with her brothers and step-mother, to defend herself, she responded to violence with violence, killing her father. The case was very famous at the time and attracted much attention. People closely followed the investigation and the trial and many people hoped for absolution of Beatrice from Pope Clement VIII. Yet the end of the story is tragic and ended with her beheading. It is told that Carravaggio was present at the execution and that it inspired him in his composition of the famous Judith and Holofernes, which is also displayed in Palazzo Barberini. The story of Beatrice Cenci became legendary and had a great impact on the literature of the following centuries, including great authors of the caliber of Shelley, Stendhal and Artaud, who made her into a romantic hero. 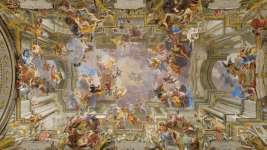 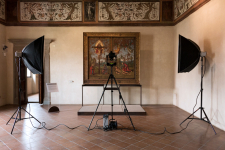 The Origins of Raphael’s Art: The Standard of the Holy Trinity


Haltadefinizione has digitized the only work by Raphael located in Città di Castello, before its impending restoration and in anticipation of the exhibition "The Young Raphael". 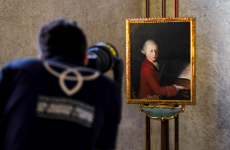 
Haltadefinizione has performed ultra-high resolution Gigapixel + 3D digital photography on the “Portrait of W. A. Mozart at the age of 13”.