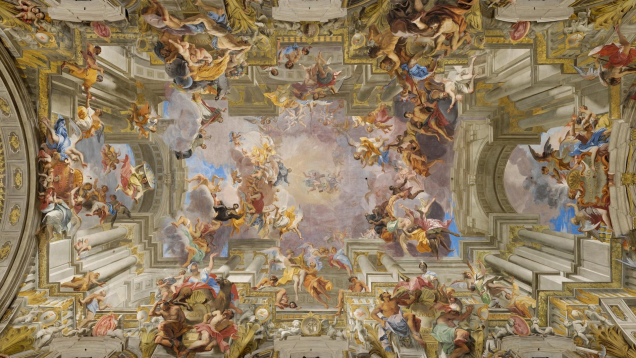 Upon the five-hundreth anniversary of the conversion to Christianity of Saint Ignatius of Loyola, founder of the Jesuit order, Haltadefinizione offers a close look at Andrea Pozzo’s immense masterpiece, a glorious celebration of the Saint.

Pozzo was himself a member of the order, and was a well-known painter and theorist of perspective who in a brief time became one of the most important figures of the late Baroque in Europe. Among his numerous works are the frescos that depict the Glory of Saint Ignatius, which place him in the first rank of Roman Baroque painters. In this ceiling, the artist displays his theoretical knowledge of perspective, showing the illusion of depth, as seen from below looking upward.

Haltadefinizione has performed ultra-high resolution “Gigapixel” digital acquisition photography of the entire surface of the ceiling frescoes, with permission from the Fondo Edifici di Culto (FEC), the monument’s legal owner.

You can admire every detail of this masterpiece in ultra-high definition, at the Haltadefinizione website.

With Haltadefinizione’s proprietary digital photography and display technology, it is possible to zoom in all the way down to the image surface, without losing ultra-high definition.

Haltadefinizione founder Luca Ponzio says, “This year marks five hundred years since the conversion of Saint Ignatius of Loyola, and we join in the commemoration with the digital publication of Andrea Pozzo’s fresco, so that art lovers everywhere will be able to see and appreciate this spectacular masterpiece.”

Some signs of the preparatory designs are among the most suggestive visible details. To paint a fresco on a large surface meant transferring the design using techniques like division into quadrants. That allowed the artist to decorate a flat surface and to transfer that into the fresco’s space to enlarge the sketch into perspective. In some places you can still see the incisions, for example in the area around the Trinity.

Pozzo’s fresco in the Church of Saint Ignatius is part of the broader scope of enhancements and greater access to Italy’s cultural heritage, brought about by Haltadefinizione.


A replica of the painting was unveiled at a conference produced by the Municipal Museums of Verona entitled, “The Young Mozart in Verona and his Formal Portrait at the Harpsichord“ (Il giovane Mozart a Verona e il suo ritratto d’occasione al clavicembalo). 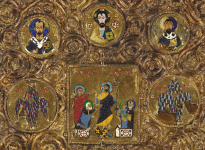 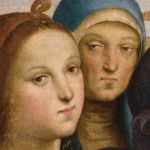 ArtBox Reports on Raphael’s Marriage of the Virgin


ArtBox, a TV show about the arts on LA7, reports on this masterpiece’s high-tech return to Umbria, a Haltadefinizione project done in celebration of Raphael’s 500th anniversary.