The celebrated painting “Il Quarto Stato”, is available in ultra-high definition gigapixel format, for the first time ever. The work is a pictorial manifesto of the Italian working class and represents the transition from the Divisionism of the late 1800s into modernity. 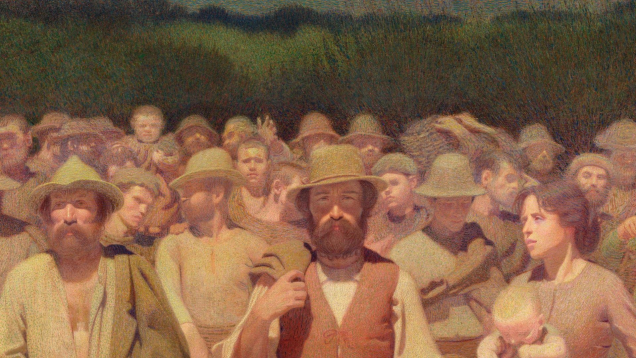 Haltadefinizione continues its mission to promote and enhance the social value of our artistic heritage, with the digitalization of the Fourth Estate by Giuseppe Pellizza da Volpedo, which is held in the Museum of the Twentieth Century (il Museo del Novecento) in Milan.

The Fourth Estate is one of the most emblematic masterworks of the 20th century and it is now a part of the invaluable online catalog of digital images. The painting is considered to be a symbol of the workers’ political and social struggles and celebrates the protection equality and of their rights. Painted in oil on canvas, this large work, measuring 293 x 545 cm (115 x 215 inches), is the result of a ten-years-long creative process. Giuseppe Pellizza da Volpedo finished the Fourth Estate in 1901 after various other attempts, the most famous of which is the Fiumana, or River of People, an elaborate preparatory drawing that he made in 1895 and 1896. It is held in the Pinacoteca di Brera in Milan and it is also available in the Haltadefinizione online catalog.

Once the work has been digitally acquired using ultra-high resolution digital photographic techniques, it will be available in Gigapixel format online. This will allow the viewer to zoom in very close, using the multimedia online viewing tool to reveal details down to single brush strokes.

“A work like the Fourth Estate is of course a masterpiece of Divisionism but it is also a social manifesto that inspires the most noble feelings,” says Anna Maria Montaldo, former director of the Museum of the Twentieth Century. “It is fascinating to be able to have such a close visit with the work, via the digital reproduction. This helps people to get to know the work and makes people want to come and visit the Museum of the Twentieth Century in Milan.”

“We are quite pleased to add one of the most important works in the Museum of the Twentieth Century to the Haltadefinizione gallery. With ultra-high definition, we can take in every detail of the work,” says Luca Ponzio, founder of Haltadefinizione. “Online galleries and digital archives are an enormous resource for our museums, because they open up new possibilities for promotion and enhanced uses of our artistic heritage. Digitalization is one of the main ways to make art more accessible to the public, at any time, in any part of the world.”

The principal objectives of Haltadefinizione’s collaborations with great museums all over Italy are the promotion of knowledge about the works, and the conservation of works, all through the application of the most up-to-date modern photographic techniques. 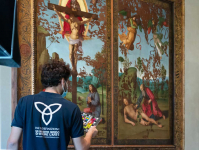 Raphael’s Standard of the Holy Trinity, Restored and Digitally Photographed


Ultra-high definition gigapixel photography reveals the work before and after restoration.


Sodai presents their new project, in collaboration with Haltadefinizione, at Downtown Design in Dubai, connecting Fine Art and interior design in a whole new way.


A new partnership with Germany' Verlag Müller und Schindler and Faksimile Verlag and spain's Eikon editores will be announced at the Frankfurt Book Fair.