The Direction of the Regional Museums of Tuscany and Haltadefinizione are collaborating on the digital acquisition of The Miracle of the Two Hanged Men by Raffaello which is held in the National Museum of the Palazzo Reale of Pisa. 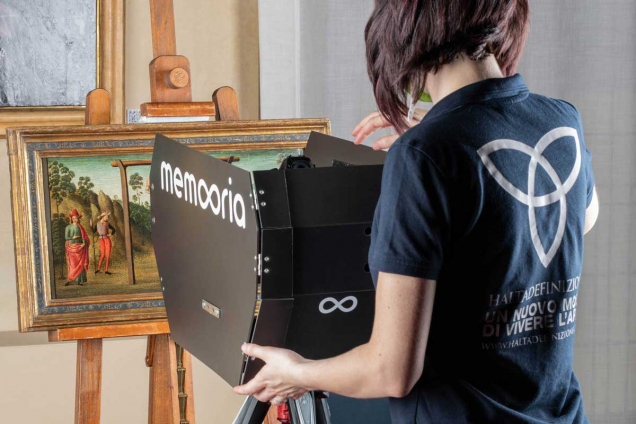 This year, when we are celebrating 500 years since the death of Raphael, the Direction of the Regional Museums of Tuscany and Haltadefinizione, are collaborating on the digital acquisition of The Miracle of the Two Hanged Men, believed to be by the young Raphael, and which resides in the National Museum of the Palazzo Reale of Pisa.

It is believed to be part of the predella of an altarpiece of The Incoronation of Saint Nicolas of Tolentino, which was made up of three panels which depicted three scenes from the saint’s life. It was commissioned of Raphael and Evangelista di Pian de Meleto in 1500 by Andrea di Tommaso Baronci, for his chapel in the church of Saint Augustine in the town of Città di Castello in Umbria. It remained there until 1789, when an earthquake damaged it so much that it was not restored but instead broken apart and dispersed. It was reconstructed thanks to some meticulous research, some preparatory drawings by the young artist and  a copy made in 1791 by Ermenegildo Costantini. Today the pieces are found in different museum collections in Italy, in the Louvre and in Detroit. The panel with the Miracle of the Two Hanged Men came into the possession of the public collections and of the Palazzo Reale of Pisa following the acquision of the Schiff Giorgini collection in 1970.

The panel represents the story of a miracle attributed to Saint Nicholas of Tolentino, in which he is supposed to have saved two brothers from hanging by holding them up by their feet for four days until their rescue. They were Mizulo e Vanni da Osimo and they were unjustly accused. There were two other panels with this one, which depicted other miracles of the same saint: The Miracle of the Partridges and the Resurrection of the Child.

Historians have long debated the origin of this work and its attribution to the young Raphael. Today, most agree that the young Raphael painted the central portion showing the saint, the gallows and the two hanged men, while it seems the landscape in the background may be attributed to a different painter than the one who did the figures on the sides.

Stefano Casciu, Director of the Regional Museums of Tuscany, says, “The fruitful collaboration between the Regional Museums of Tuscany and Haltadefinizione continues, with the digital acquision of the Miracle of the Two Hanged Men. We have already digitalized the works of Beato Angelico in the Museum of San Marco and made them available online. This allows the general public to see the finest details of this work, making them available online with the most advanced tools.”

Says Fabrizio Vallelonga, Director of the National Museum of the Palazzo Reale, “This health emergency has complicated our lives and has forced museums to re-examine their programming.  So it has been particularly important for us to have performed digital acquisition of the Miracle of the Two Hanged Men, because it allows us to make the work more available and to share the work going on backstage as we seek to promote Raphael’s works this year, 500 years after his death.”

The ultra-high definition digitalization of the work will be useful to deepen our understanding of the work, to test various hypotheses and to discover other elements useful for research. The high quality digital reproduction and Haltadefinizione’s multimedia viewer allow us to study the surface of the painting in great detail. 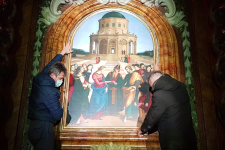 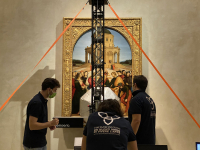 
3D imaging allows researchers to see the shape of the surface of works of art, making it a valuable source for research and a new way to enjoy art.