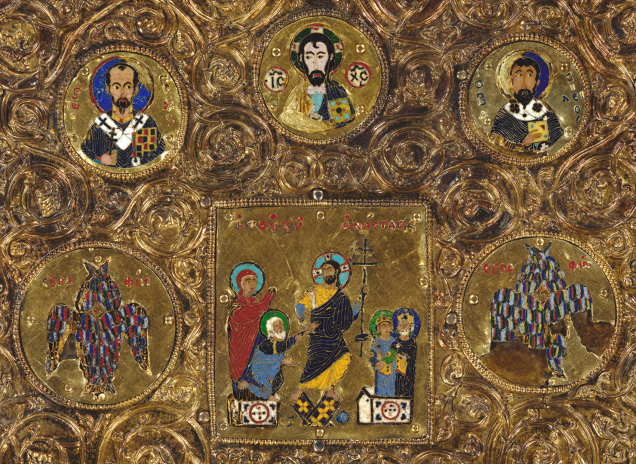 The Siena municipal library of the Intronati and Santa Maria della Scala have begun a project aimed at preserving and providing enhanced uses for the priceless “Evangeliario” or Book of Gospels, with financial support from Gruppo Acea S.p.a. Digitalization and ultra-high definition photography have been completed, by the Intronati library photography lab and Haltadefinizione, respectively. A division of the Franco Cosimo Panini publishing company, Haltadefinizione specializes in digitalization of paintings, documents and ancient manuscripts, in collaboration with its partner company Memooria.

The Book of Gospels is properly known as a lectionary, as it contains the readings taken from the four Gospels, to be read in liturgical celebrations in the Byzantine rite, for an entire year. As for its binding, that is a magnificent example of Byzantine and Venetian artisan work. The cover is in gilded silver, with numerous small enamel decorated medallions. The goldsmith work is datable from the late thirteenth to the early fourteenth century, while the byzantine enamels are from different eras ranging from the late tenth century to the thirteenth century.

The page depicting the evalgelists is made of parchment and richly illustrated with four full-length figures on a gold leaf background, showing them seated at their writing desks, which also display their working tools. The illustrations of the text contain a great variety of finely drawn initial letters, which use the shape of the human body, of plants or of animals in their design.

The final result of the digitalization of this priceless codex will be an exhibition of the Book of Gospels at Santa Maria della Scala, which will include an interactive multimedia player that will make the work entirely available via Gigapixel+3D technology. Visitors can look through the pages of the entire book. They can also zoom in on any part of the image, to reveal the details of its extraordinary decorative work.

Haltadefinizione’s Gigapixel+3D photographic technology does not make contact at all with the work being photographed, which protects the work itself and also provides the highest quality digital image. Given this manuscript’s importance and the fact that it is particularly delicate, all the digitalization work was done on site and the team made a complete copy of all of its pages. Furthermore, the 3D digital acquisition process provides the mapping data to recreate the object’s form, and to faithfully reproduce colors, tone, details, shapes, precision and light on the surface.

Digital imaging technology today is a valuable source of material and information for research and study, and at the same time, it provides a baseline copy to support future conservation efforts for the Book of Gospels. Haltadefinizione’s digital acquisition equipment is designed to meet the stringent standards of the Italian ICR, the Higher Institute for Restoration (Istituto Superiore per il Restauro).

The virtual copy will allow visitors to immerse themselves in the manuscript in a new way, creating a richer experience for the visitor as well as a new way for a museum to operate.

The History of the Book of Gospels

In 1359, the Hospital of Santa Maria della Scala in Siena came into possession of a collection of relics that came from the Imperial Treasury of Constantinople, including this priceless Book of Gospels, after a negotiation conducted in Venice between Brother Andrea di Grazia, envoy of the Siena hospital, and Pietro di Giunta Torrigiano, a Florentine merchant.

Torrigiani had acquired the relics in 1357 in Constantinople. By a written agreement signed on May 28, he donated all the sacred objects, valued at 3,000 gold Florins, to the hospital, in exchange for a lifetime pension and the use of a house.

The codex dates to the second half of the eleventh century. In 1786, by order of the Grand Duke Pietro Leopoldo, the codex was given to the Biblioteca della Sapienza, today the Municipal Library of the Intronati, in Siena. Since then it has belonged to their collection of manuscripts, with “X.IV.1” its catalog number. In 1996, an extensive restoration project was done at the Laurentian Library, for the parchment portions, and at the Opificio delle pietre dure, (literally ‘Workshop of precious stones’) the Italian central state institute for restoration. This work was reunited with the other relics for the exhibition “The Gold of Siena” which was held in the Santa Maria della Scala museum complex, where the volume is still held, on long term loan from the Municipal Library.

The new exhibition at Santa Maria della Scala opens Thursday December 16, at 10:30 am. 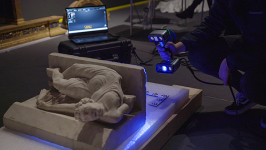 The Galleria Nazionale of Umbria enters the digital age 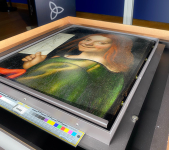 The 3D replica of the Portrait of a child with drawing by Caroto, from the Museum of Castelvecchio to the Academy of France in Rome


Haltadefinizione’s technology is back at the Civic Museum of Verona to support enhanced use and valorization of one of its most well-known works. 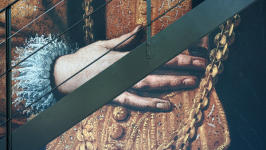 
Materials, art and technology: a reproduction on cloth of the Portrait of a gentle lady by Tanzio da Varallo is on display in the new Haltadefinizione showroom at Decor Lab.

We have more than 700 masterpieces of Italian art in HD digital format.

Servizi per i Beni Culturali -en

Whatever your objective, digitalization of the arts can make it happen.

Digitalization in galleries, libraries, archives and museums: the future is now.

Why is digitalization important?

Because it turns out to be very worthwhile

We are the custodians and the beauty is that of Italy.

From the physical collection to the digital one

Reach a potentially limitless audience with the Haltadefinizione platform.

Face-to-face with works of art

Replicas of fine art are reproductions of works at their original size.

Are some works difficult to put forward?

Art works to see... and touch!

An extraordinary opportunity to enhance the experience of the original work.

Zoom in on any detail that you want, without any loss of image quality.

We support you with our expertise in rights management.

More than 700 masterpieces of art in ultra-high definition gigapixel format.

Custom replicas for any need

Works of art in any format can decorate large spaces and architecture with a touch of class.

Now it is easier than ever.

We must be actively engaged as custodians of the treasures that are handed down to us.

Why is it important to digitize works of art without removing their protective glass frames or cases?

The importance of the microclimate.

The Uffizi Gallery, The Pinacoteca Ambrosiana and the Museum of the Twentieth Century